If you need to lose weight fast and have already undergone some form of bariatric surgery such as a gastric bypass, you may be considering lap band surgery following gastric bypass.

However, if you continue overeating after the procedure, the pouch will stretch and your weight loss efforts will be futile.

Sometimes, faults during the gastric bypass surgery, like a surgeon leaving the stomach pouch a little too big, can indeed cause a type of rebound weight gain after the initial excess weight has been lost in the first year after surgery.

While having another gastric bypass is certainly an option, many weight loss surgeons in South Africa suggest lap band surgery after gastric bypass, citing this as a healthier and less risky solution.

This type of weight loss surgery involves a restrictive band being placed around your stomach. A port is then embedded just under the skin and water injected into the port to help tighten the lap band.

Water can be removed from the lap band too. By altering the restrictiveness of the band when necessary, the band can be repositions or can allow for greater food intake. 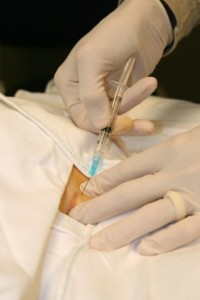 It is possible to have lap band surgery following gastric bypass

Lap band surgery works in a very similar way to a gastric bypass in that the amount of food you can consume is restricted.

The difference between a gastric bypass and lap band surgery is the permanence of the procedures. Lap band bariatric surgery allows the stomach band to be removed at any time the dieter wishes.

Gastric bypass is a reversible procedure but you will need to undergo major surgery to reverse the operation. Lap band surgery, on the other hand, doesn’t require a major operation.

For patients who have undergone a gastric bypass and have failed to lose the desired weight, they can revise the procedure, but this is more dangerous than the initial bypass surgery. There’s increased scar tissue and also an increased chance of the stomach pouch stretching again. These factors need to be considered before undergoing the knife for a second time.

However, with lap band weight loss surgery, there are no increased risks and it is therefore considered a much healthier and safer option.

Patients who have undergone lap band surgery after gastric bypass have reported to rapidly losing weight and enjoying positive results.

The biggest downside is that South African medical aids don’t cover bariatric surgery and the procedures are certainly costly. If you do qualify for such a procedure, apply for medical finance today by clicking on the banner on this page or going straight to the Incred website.