Bariatric surgery has become a popular choice for curbing obesity. Gastric surgery in particular is one of the most common methods that helps patients with fast ways to lose weight and even attempt to cure diabetes.

According to WebMD, two particular studies have shown gastric band surgery to be more effective than newer techniques. These studies were published in the Archives of Surgery and set out to compare gastric surgery with laparoscopic gastric bypass surgery and sleeve gastrectomy.

What the Studies Show 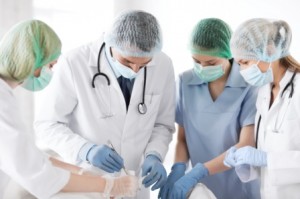 Gastric surgery can mean the end of obesity

During both studies, the bypass offered better results, mainly because the surgery reroutes digestion ensuring what you consume bypasses a portion of the small intestine.

With lap band surgery, there are fewer complications and it’s simply a safer, less invasive procedure. But, the weight loss achieved is far more modest than that achieved through gastric surgery.

In further studies conducted at University of California, San Francisco, 100 patients who had opted for lap band procedures were matched to 100 patients of the same age, race and sex who opted for gastric surgery.

After a year, the gastric bypass patients had lost as much as twice as much body weight as the lap band patients.

In another study, Taiwan researchers recruited 60 obese patients who had poorly controlled type 2 diabetes. Half the patients were assigned to gastric bypass surgery and the other half, a sleeve gastrectomy (where a portion of the stomach is surgically removed and small sleeve created).

What is Gastric Bypass Surgery?

This type of surgery involves dividing the stomach into a smaller upper pouch and a larger lower pouch. The small intestines are rearranged to connect the pouches. The stomach can then only hold small quantities of food at a time and you are no longer able to eat large meals, leading to impressive weight loss and control of medical problems such as diabetes and other weight-related issues.

Many medical aids in South Africa do not cover the cost of gastric surgery. That shouldn’t hold you back, though. If you feel you would be eligible for this type of surgery – whether you’re obese, suffering with diabetes or struggling to lose weight with traditional methods like dieting and regular exercise, click on the Incred banner on this page and find out if you qualify for medical finance with competitive interest and repayment rates. Or go straight to the Incred website.